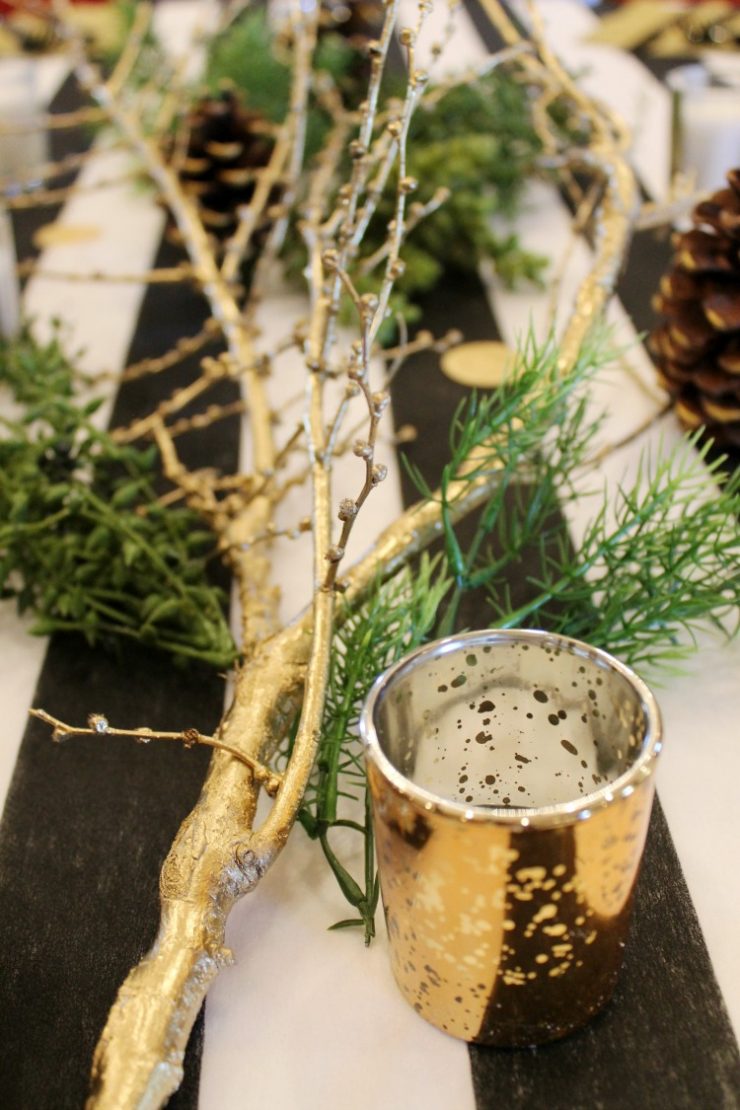 In January we all celebrated my mother-in-law’s birthday with a big Black, White, and Gold 60th Birthday surprise party!  Me and my sister-in-law had so much fun working on all of the little details that made this party so special and I wanted to share how we did it.  We did A LOT of DIY projects to keep the cost down and LOVE how it turned out.  I also used several great items from  Oriental Trading that really made the party extra fun and easy!

First let’s talk about the tables: 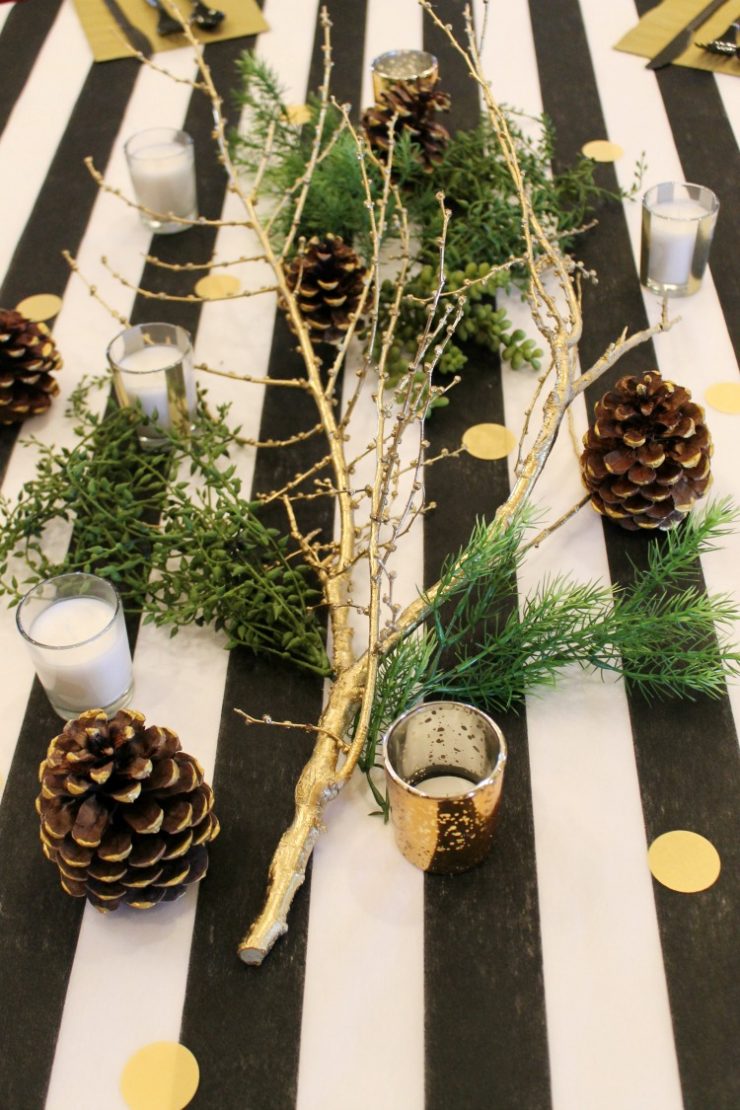 I used the black and white gossamer runner for a few things but it was mainly used as a table runner.  We put it over a white table cloth to make the stripes pop and it kept the tables fun and modern.  Next we took some branches from a tree and my sis-in-law spray painted them with gold paint.  These were one of my favorite parts of the party and they barely cost anything.  We took some clear candle votives and I added some gold washi tape stripes and then we also used some gold votive candles.

We added some succulent and asparagus fern greenery and then added some pine cones that we rolled in gold paint.  I used my circle punch to cut some little gold confetti pieces out of gold velum paper too. 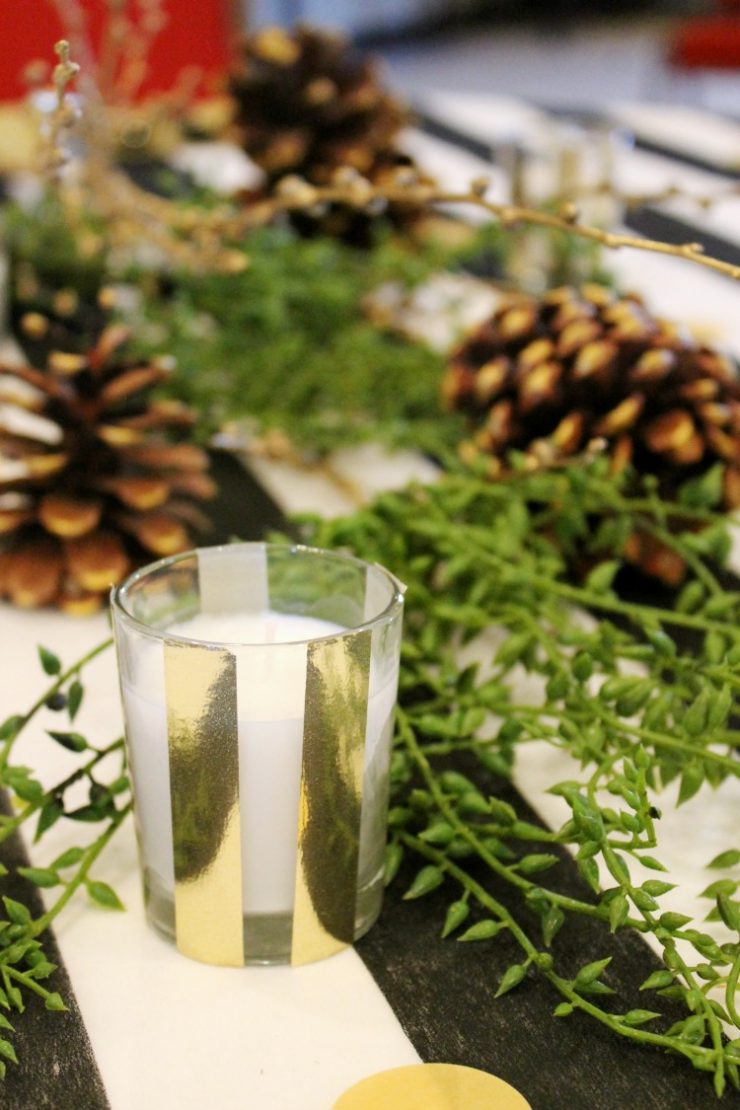 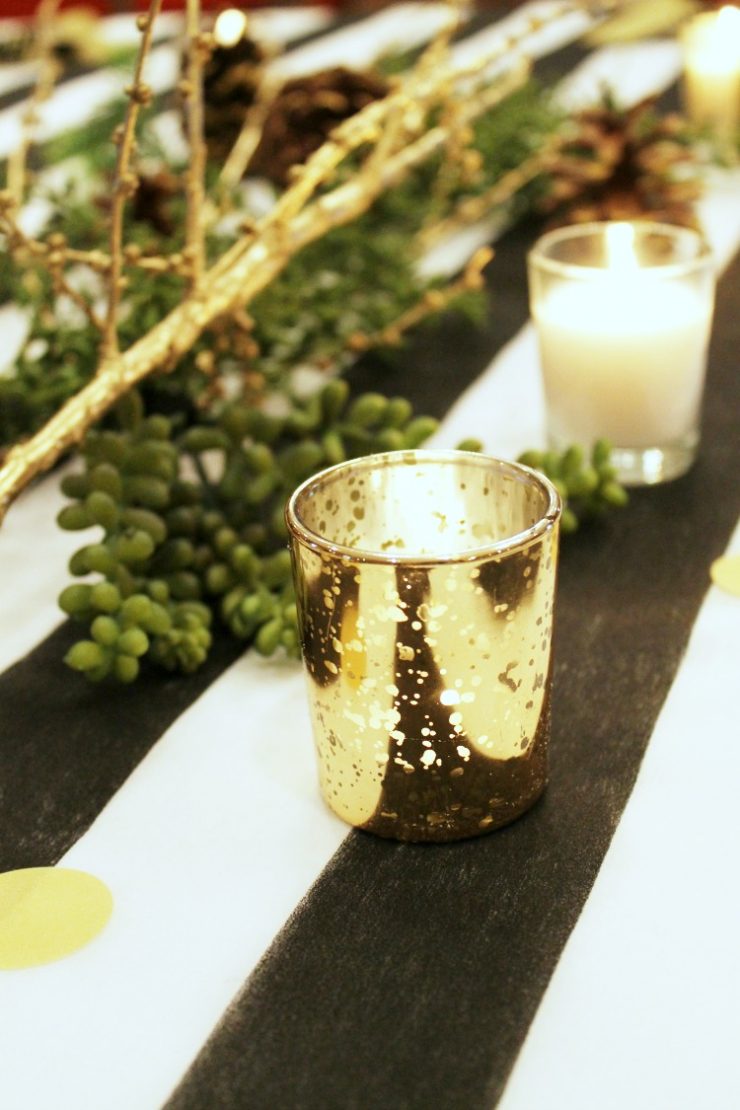 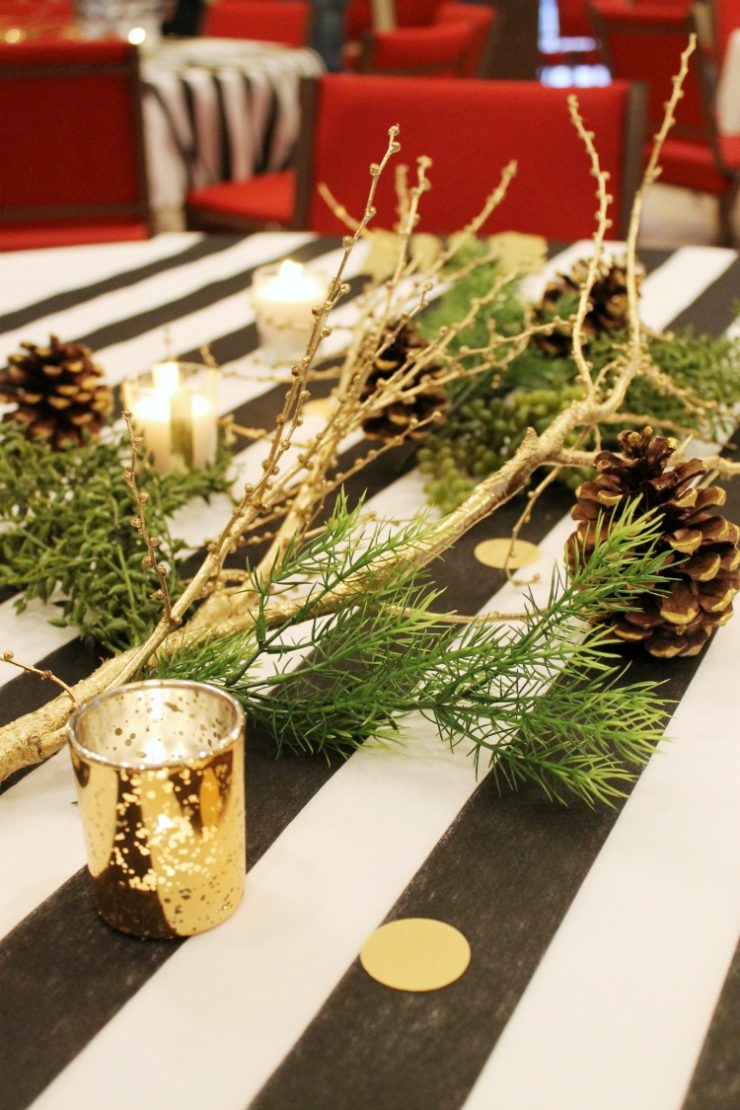 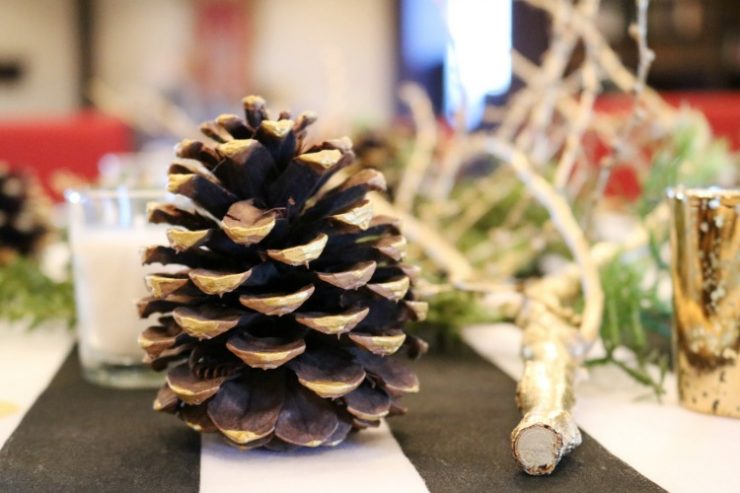 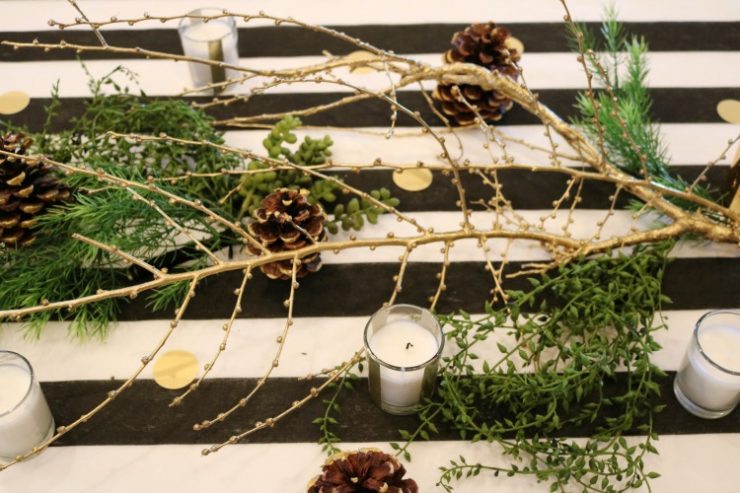 Next my sis-in-law collected old family pictures and some new ones too.  She had them all copied in black and white, cut them out, and then created a HUGE number 60 collage on the wall.  She pieced them number together on the floor first so that it was easier to place on the wall and we used removable sticky squares so it would come off at the end of the night. 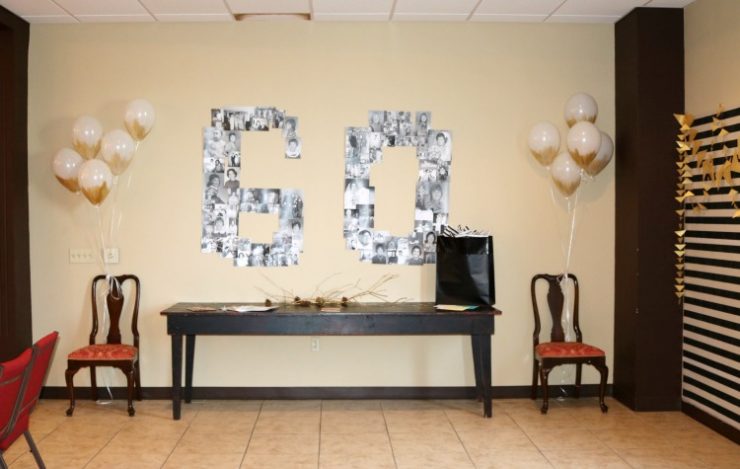 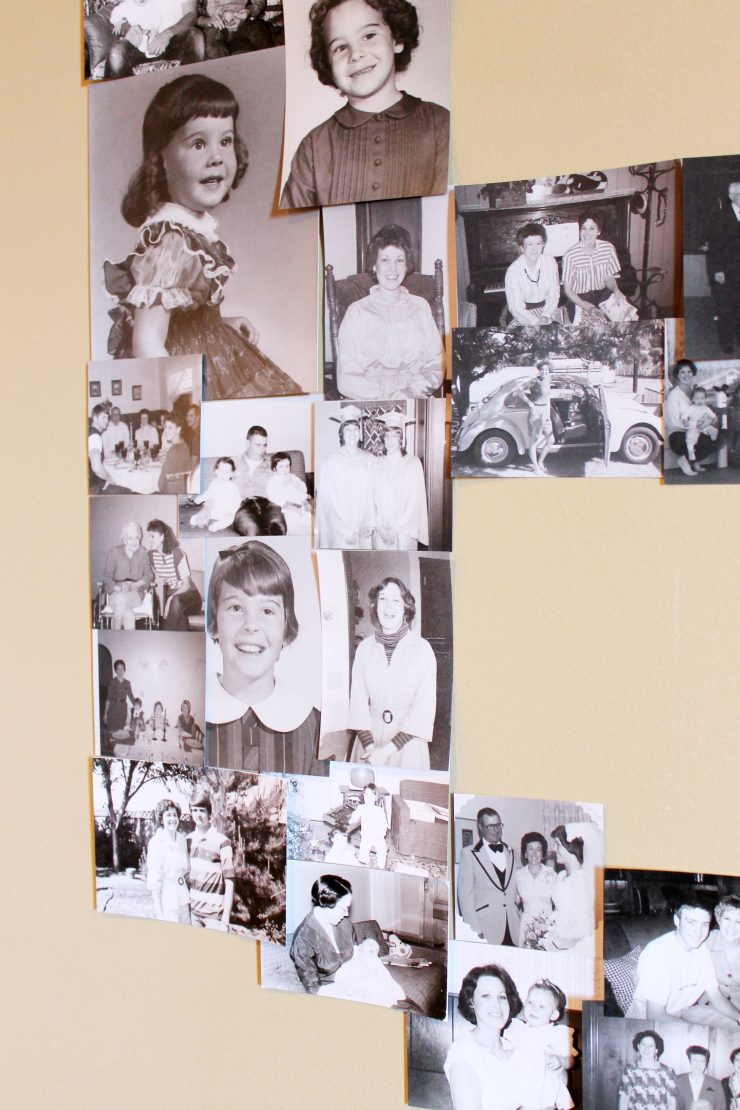 We put this over a table for her gifts and the games that we were going to play.  People loved to look at the pictures and now she has all of those black and white pictures as a souvenir from the party too. 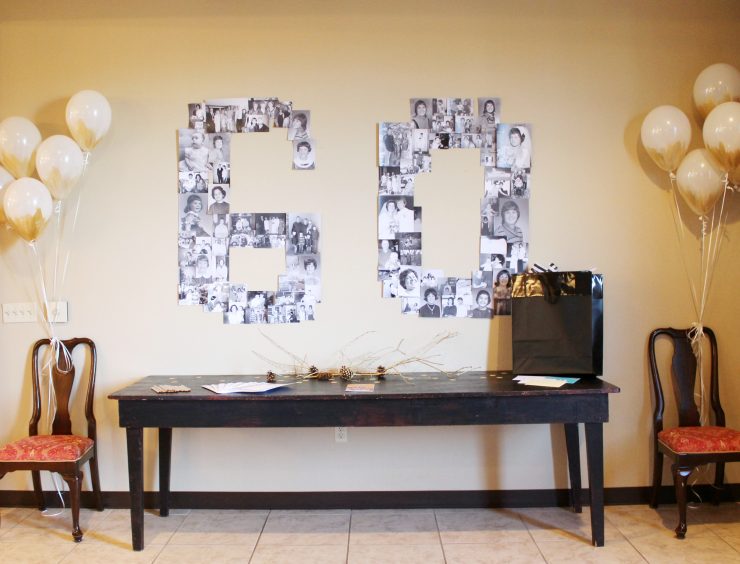 I also painted some white balloons with gold paint to put on each side of the 60.  If I had more time, I would have done two or three coats…but we ran out of time.   🙂 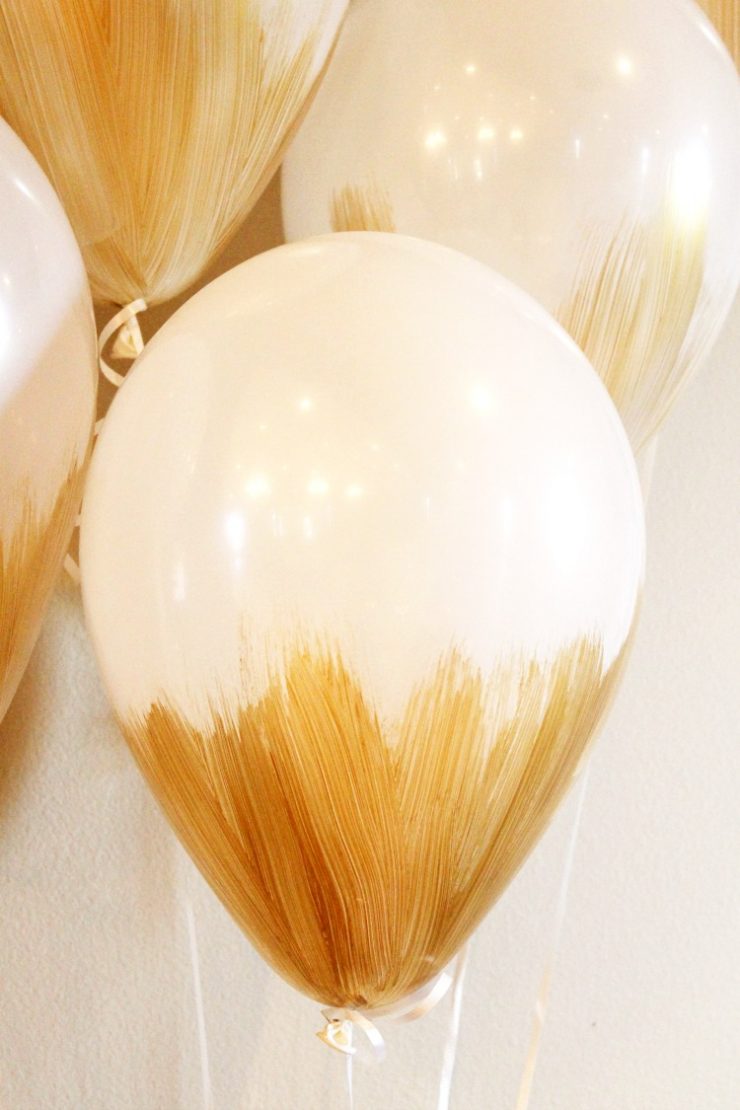 For the welcome and sign-in table, I found a little shadow box that had a slit in the top from Hobby Lobby.  I wrote with a gold Sharpie “60 reasons we love Saundie” and then everyone who came in wrote a few reasons on some tags.  By the end of the night, the box was full of reasons people love her. 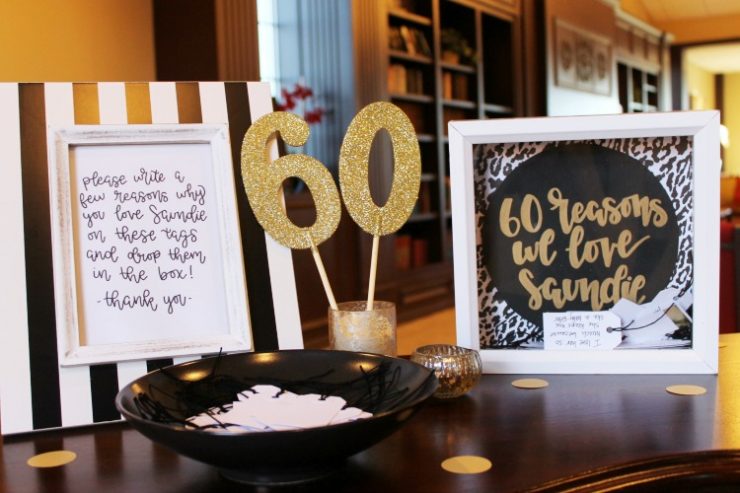 I also made a little sign-in sheet so she could remember who was there.  I just put a plain piece of cardstock paper over pretty piece of scrapbook paper and did a little hand lettering at the top. 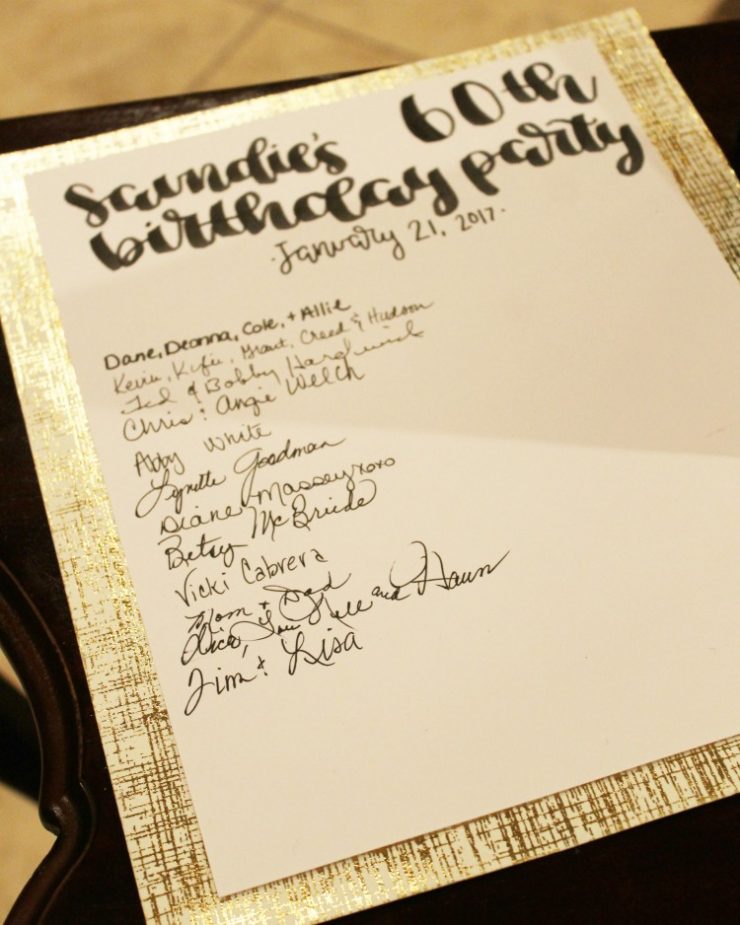 For the photo booth, I wrote on a few black signs with a gold Sharpie and people used those as props.  I just created a backdrop with the black and white gossamer again and then cut gold velum triangles and stitched them together for the fun garlands. 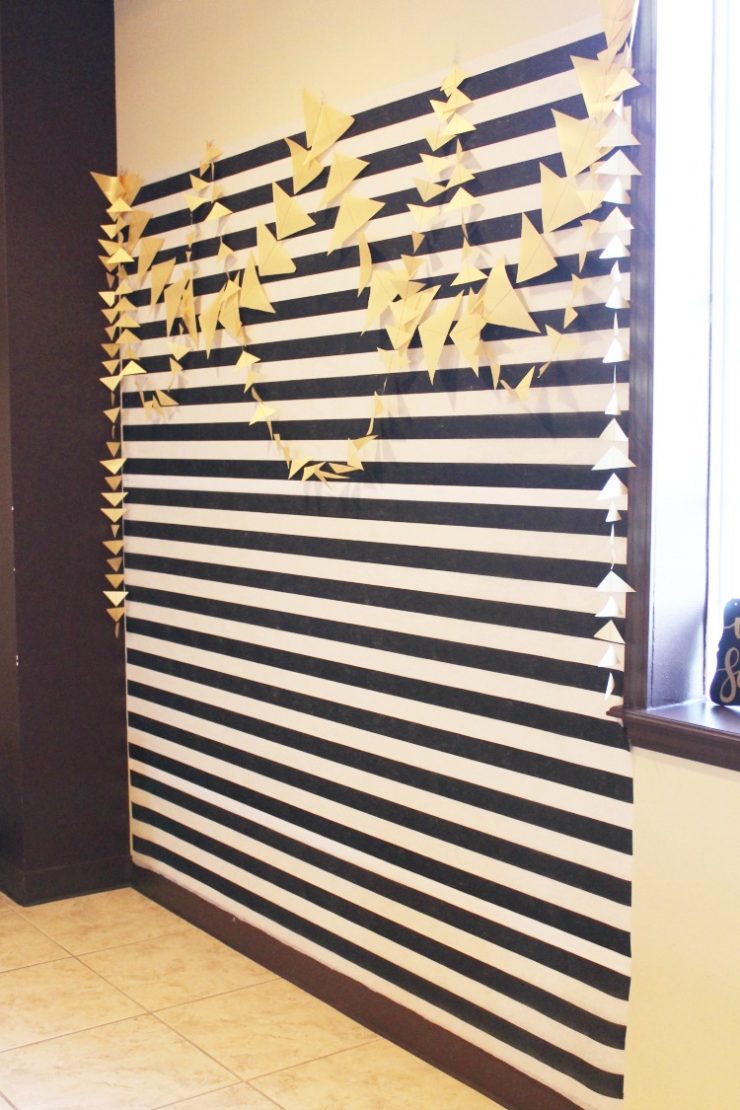 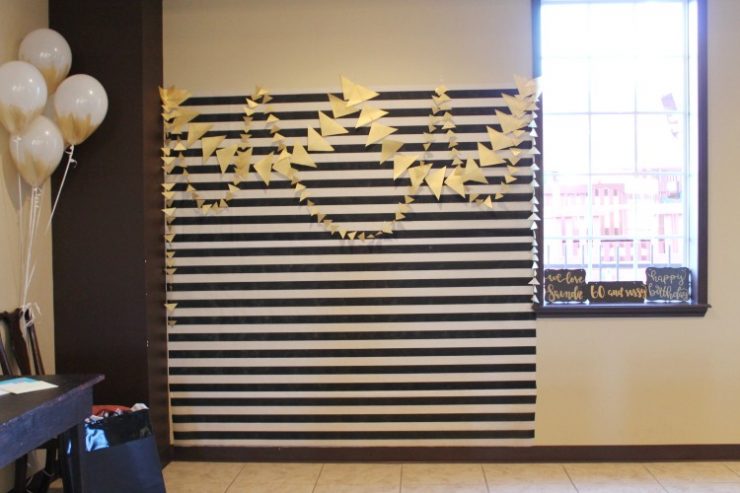 Here are some pictures of the photo booth in action!

We also created a game where we made up questions about my mother-in-law’s life and everyone took the quiz to see who knew her the best.  My sis-in-law designed the quiz and then I bought some cute black and white pencils to match it. 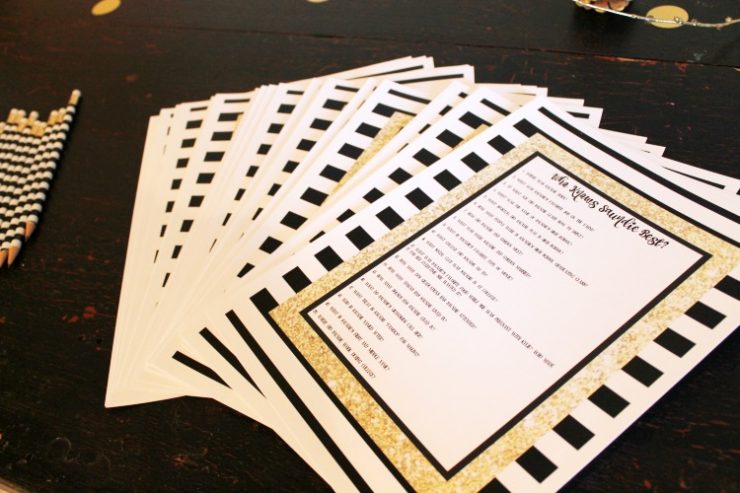 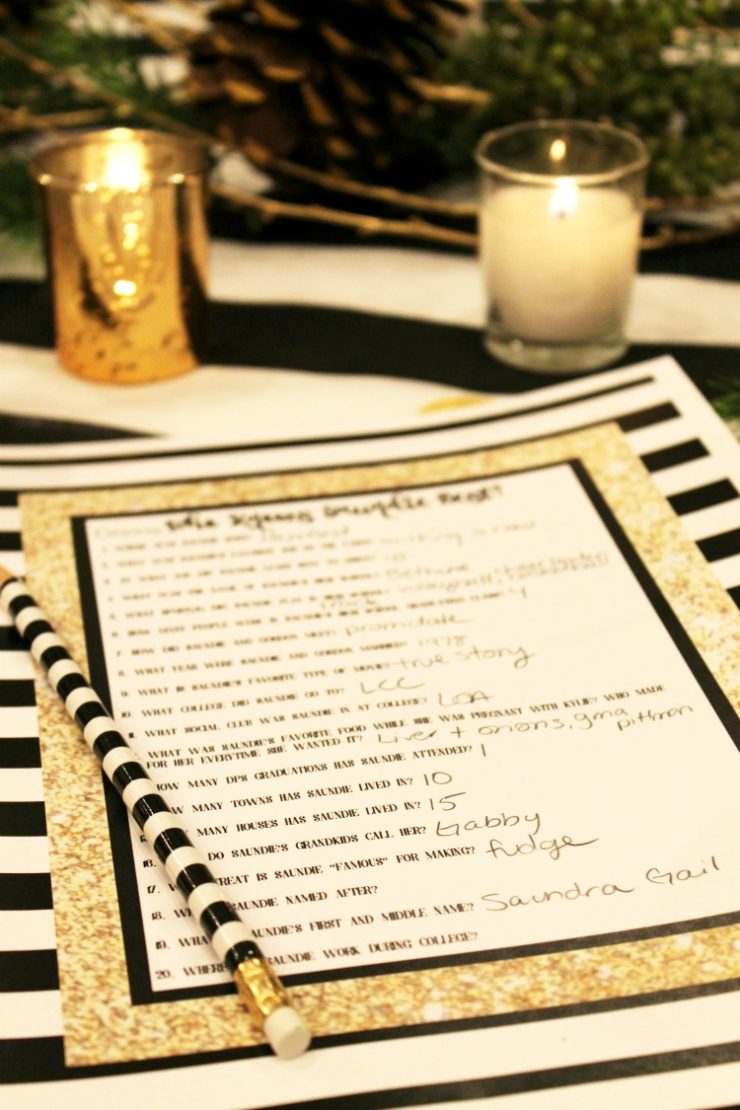 My son really tried hard on this quiz and his answers were the BEST!  🙂 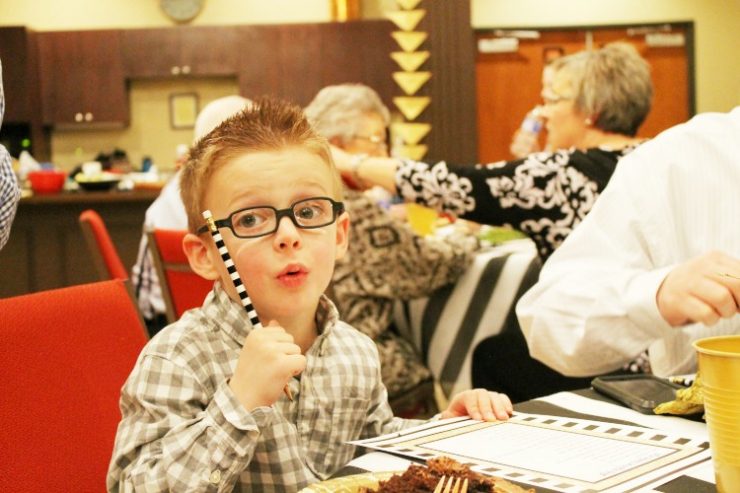 We served everyone super yummy burgers that my brother-in-law made and then we had a fun dessert table with cakes, strawberries, and cute little gold birch plates and napkins. 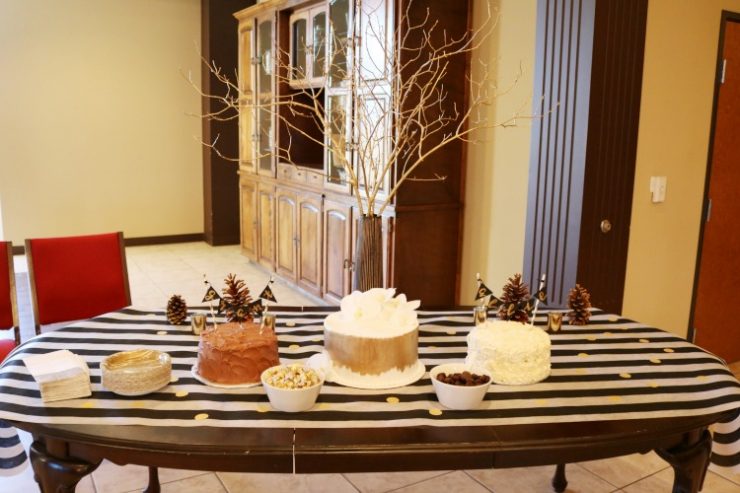 I made these tiny cake banners with some black cardstock, a gold Sharpie, and some gold straws. 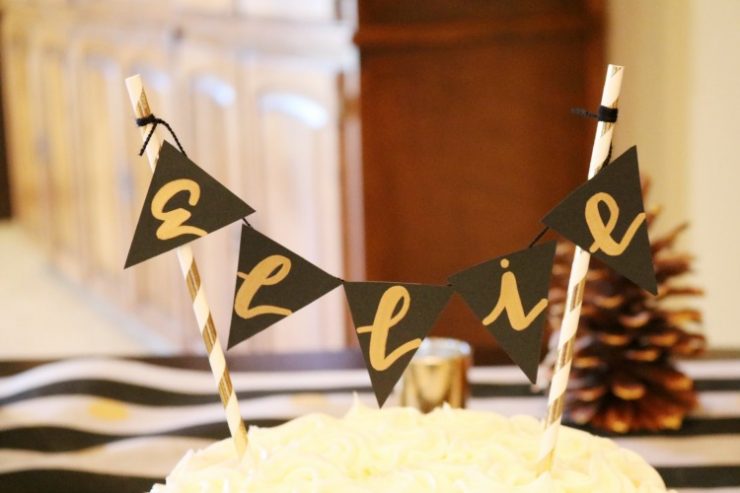 I am pretty sure that while dipping these, I ate about 20!  🙂 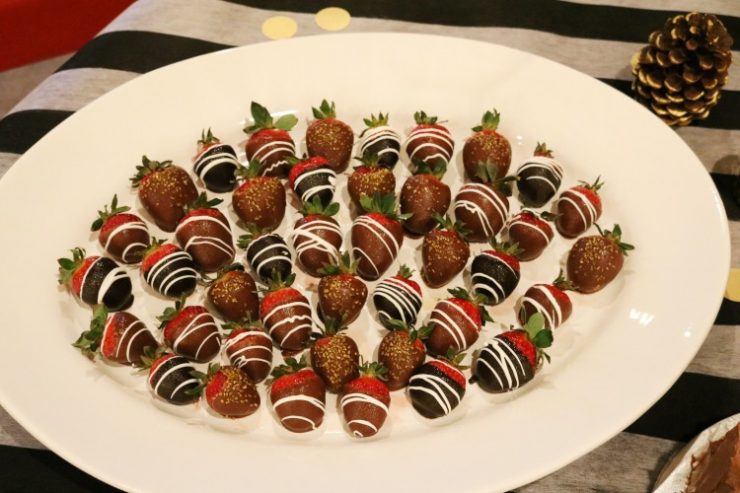 I also create a HUGE birthday banner over the buffet area with the black cardstock and gold velum triangles that I sewed together. 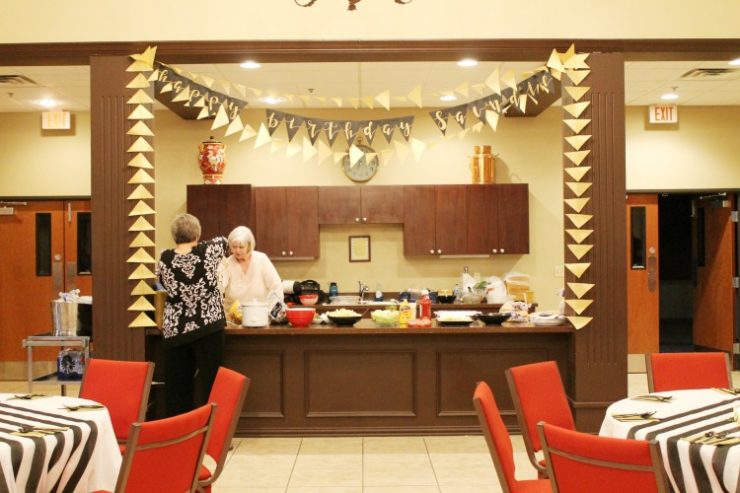 My mother-in-law was SO surprised and we all had a great time celebrating her! 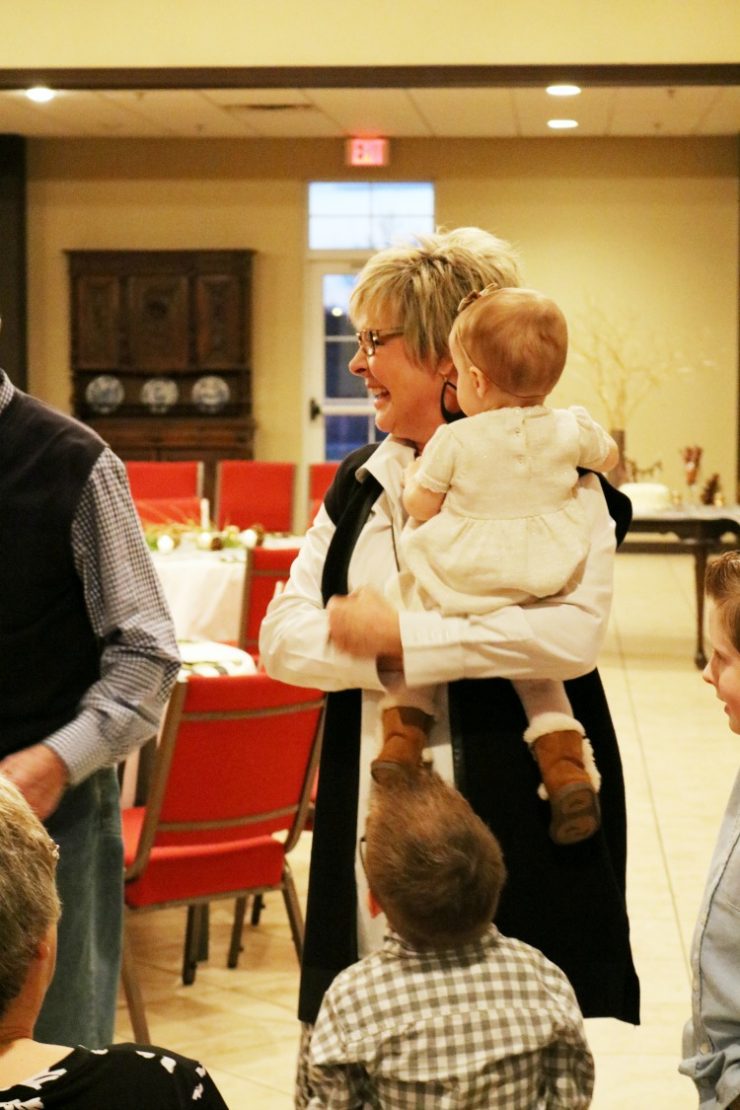 For more 60th birthday ideas, check out my other parties! 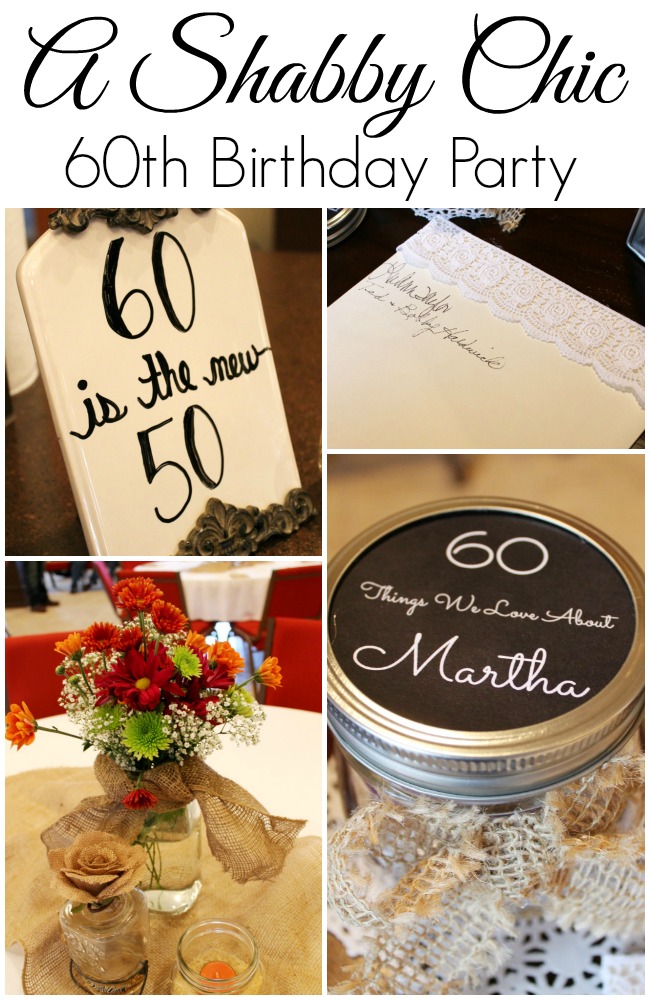 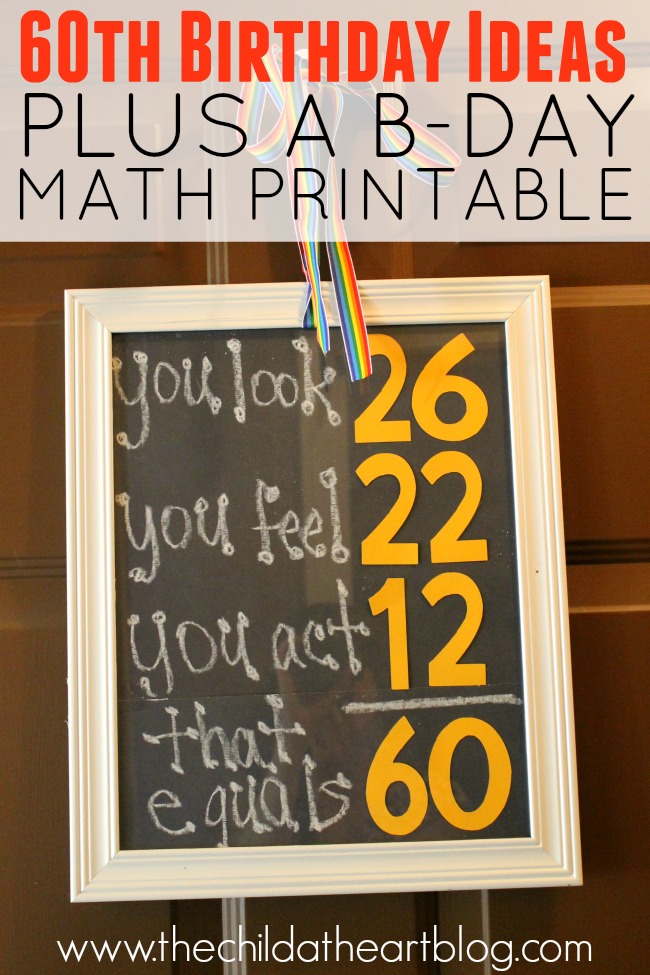 **Some photos were taken by Kylie Ford.